Anti-corruption: life or death for the party – Zhang Lijia

For the communist party, fighting corruption is a matter of life and death, author Zhang Lijia told CNN’s anchor Kristie Lu Stout in “On China”, focusing on the crackdown on corruption by the current leadership. “They will catch a big tiger from each province. But again you guess, which tiger will get caught. The most corrupt one, or the most politically weak?”

Lijia Zhang: I think ever since Xi Jinping took power he has launched this vigorous anti-corruption (campaign) and he said this is a life and death matter. So I’d say the main target is officials so they have introduced all sorts of new measures.

For example no red carpet and officials cannot spend massive amounts of money on having banquets. Now they can go out for a conference or whatever and they’re allowed only four dishes and one soup and they’re not allowed to use official cars for their personal gain. They’re not allowed a bonus. Before they often generously paid themselves a bonus and now they cannot work overtime in their spare time. There’s no extra pay. So I think the people feel the impact of officials, but there are other ways to deal with that.

Kristie Lu Stout: You mention for the Chinese communist party, fighting corruption is a matter of life and death. Why is it a matter of survival for the party? Why is it that critical?

Lijia Zhang: Because corruption has become so widespread and has really damaged the reputation of the party and damaged the legitimacy of the party, which is for the very survival of the party and he feels the need to have this launch corruption campaign. William, I totally agree, it’s a total lack of rule of law. And also I think the current political structure has been in place for so long, no change has become a really rich breeding ground for corruption…

Kristie Lu Stout: What I’m trying to get into is that it still seeps into the daily lives of Chinese, whether it’s trying to gain access to a hospital bed or trying to improve your test scores it school. It is out there isn’t it?

Lijia Zhang: Absolutely, corruption has always been there are always surveys and corruption always been voted as the most hated social problem, the top concern among ordinary people. But I think that’s also everybody hates corruption, but also everybody is part of corruption. You talk about hospital beds, for example by father fell ill very badly last year. There was a decent hospital near my home, but the hospital beds were all full. One of our relatives managed to get my father a private bed, private room which was reserved for a high ranking leader. My father was not entitled to and in return this head of the hospital his son wanted to go to a good school, so my relative was able to manage that…

I think the campaign is not far from being blown over. We mentioned his talk about self-criticism, this could serve as a warning. And I heard that soon there will be a campaign. They will catch a big tiger from each province. But again you guess, which tiger will get caught. The most corrupt one, or the most politically weak? But still catching a tiger it’s better than, it’s good. If the tigers are cleaned, the flies all vanish.

Zhang Lijia is a speaker at the China Speakers Bureau. Do you need her at your meeting or conference? Do get in touch or fill in our speakers’ request form. 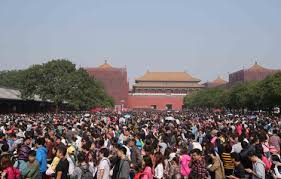 Devastating pictures of tourist areas in the Golden week of October showed again that taking a holiday together with 428 million others is not always a good idea, even though a growing number might go abroad. The now adjusted system of Golden Week was introduced to encourage consumer spending – still high on the political agenda. But would a paid leave, where you can decide yourself your holidays, be a good alternative? Some love the ideal, others loath it. And what is worse, many Chinese would most likely not take their holidays, but try to cash in at the end of the year. That would cause consumer spending to drop. What would you do? How did you spend your holidays in October, and what would be a good alternative? Join the +China Weekly Hangout on Thursday 17 October, 10pm Beijing Time, 4pm CEST(Europe) and 10am EST (US/Canada). You can leave your remarks here, but during the event you can also ask questions and remarks using the Question tool at the event page here. At the event page you can also register for participation at the hangout. (You can read our initial announcement here.)

What can China learn from Singapore in terms of sustainability, the China Weekly Hangout asked on October 10 sustainability expert Richard Brubaker. Moderation by Fons Tuinstra of the China Speakers Bureau.