The Rupert Hoogewerf´s Hurun China IT List illustrated over the years where money in generated in China´s economy. IT-tycoons are super wealth creators, says Hoogewerf to the China Daily, not only for themselves, but for many others too.

Jack Ma and his family’s total wealth in IT industry was 195 billion yuan, followed by Pony Ma, whose wealth increased by 30 percent year-on-year to 134 billion yuan, according to the Shanghai-based Hurun Research Institute.

Due to the rapid growth of the online gaming sector, NetEase Inc founder Ding Lei doubled his wealth to 96 billion yuan, surpassing Baidu Inc Chairman Robin Li and ranking third in the IT rich list.

Hurun Chairman Rupert Hoogewerf said: “Those entrepreneurs should be called ‘super wealth creators’ instead of simply ‘rich people’, which could highlight their contribution to China’s society and economy. They’ve created such a lot of opportunities and jobs.” 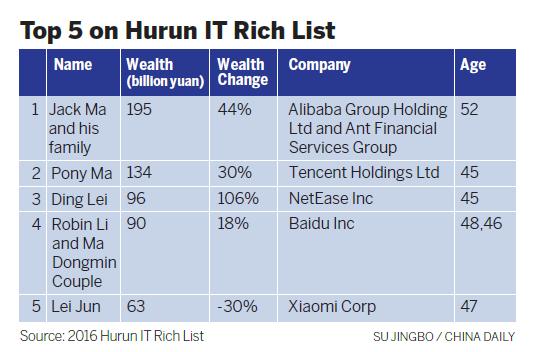 More in the China Daily.

Rupert Hoogewerf is a speaker at the China Speakers Bureau. Do you need him at your meeting or conference? Do get in touch or fill in our speakers´request form.

Are you looking for more stories by Rupert Hoogewerf? Do check out this list.